Room temperature is always a hot topic in the office. No matter what you set the workplace thermostat to, it can seem impossible to please everyone. Someone is always too hot or too cold. Even so, it’s very important to get it right, because research shows that temperature has serious effects on work performance. Turns out, it’s far more than just a comfort issue. So, what is the optimal workplace temperature? Let’s dive into the science to find out. 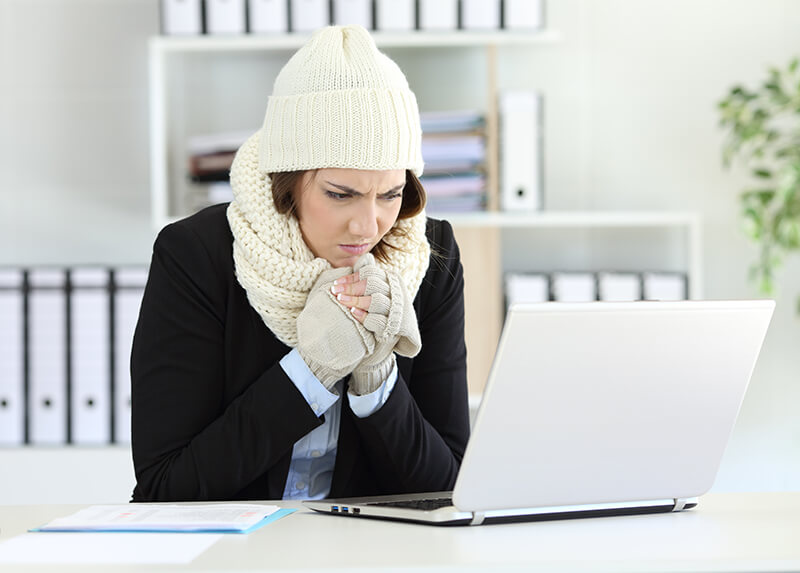 In a cold environment, our bodies go into survival mode to protect our organs. As such, this means there’s not as much blood pumping to the extremities. This can make finger and hand movements slower. As a result, this can limit typing speeds. Think about athletes preparing for a game or routine. Many will use hand warmers or rub their hands together to get the blood flowing.

Additionally, when the body is cold it has to expend more energy to stay warm. That means that workers will have less energy for concentration and creativity. Or, they might use space heaters. Either way, it’s going to cost the company extra dollars. Conversely, a hot office isn’t exactly helpful either. Nobody wants to spend all day sitting in an oven. Heat can make workers uncomfortable and even dehydrated. And, no one wants to step up to the front of the room with sweaty underarms.

What the Experts Have to Say

Across the board, most people seem to think the workplace thermostat should be set between 65°F and 80°F. Any colder and you might freeze out your staff. Any warmer and they’ll be sweating in their seats.

But, 15 degrees is still a pretty big range. So, researchers around the world have tried to narrow down the optimal office temperature once and for all. For a while, the consensus was that colder was better. But, in 2004, Cornell University found out that warmer is actually better. Over a month’s time, they tested workers in temperatures as low as 68°F and as high as 77°F. Surprisingly, they discovered that workers were most productive at 77°F. They had more output and made fewer typing mistakes.

So, 77°F it was. That is until more research came out. A study published by the Lawrence Berkeley National Laboratory in California says that the optimal workplace temperature is between 69.8° and 71.6°. That’s a big drop. Today, the official verdict is still unclear. And, while temperature plays a role in productivity, many other factors do, too.

The Impact of Gender & Physical Activity

The ideal office temperature also differs depending on gender. And, it has to do with contrasting metabolic rates. Specifically, men produce more body heat and tend to be warmer than women. They also tend to wear warmer clothes in the office. So, if your company has a larger percentage of one gender than the other, you may want to adjust the workplace thermostat accordingly.

It also depends on how active the workers are. If they sit at a desk for long periods of time, you’ll want to raise the thermostat. Also, if the employees are always in and out of the office or walking around, a lower setting might be better. In the end, the ideal office temperature is the one that makes the majority comfortable, happy, and productive.

On the whole, if you want your staff to be comfortable, you need an HVAC system that operates at peak efficiency. And, The Severn Group can help. We can design, build and maintain your commercial HVAC. Simply tell us what you need, and we’ll be happy to make it happen. Schedule a call today.